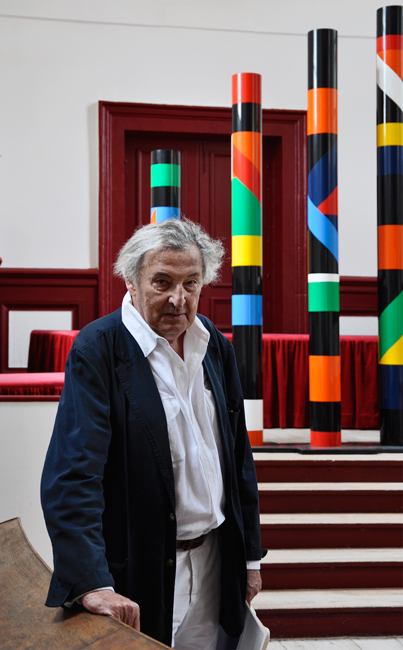 The French painter and sculptor Guy de Rougemont (1935-2021) attended the National School of Decorative Arts in Paris and completed his studies at the Casa de Velázquez in Madrid. From the early 1960s, his geometrically inspired paintings in bright, warm colours featured in exhibitions, galleries, salons and biennales in France and around the world. At the same time, from 1970 he adorned public spaces with the huge frescoes, “patterned surfaces” and polychrome columns that would make him famous, not just in Paris (forecourt of the Musée d’Orsay, esplanade of the Musée d’Art Moderne, entrance hall of Saint-Louis hospital), but throughout France and around the world, from Germany and Portugal to Japan and South Korea, and even Ecuador. He was elected to the Academy of Fine Arts of the Institut de France in 1997.

Having long worked on regular forms, from the ellipse to the cylinder, Rougemont subsequently turned to what he calls the “serpentine line”, a term taken from 16th century Italian painting, whose sinuous, random undulations emphasise or temper contrasts of light and shade. The two works which he has recently created for Mouton, on a commission from Baroness Philippine de Rothschild, belong to his present manner. The first, for the new room in which the “Paintings for the Labels” exhibition is displayed, is an iridescent colonnade of gilded brass with a recurring motif of wine-coloured whorls. The second, to illustrate the 2011 vintage, is a drawing which, from gold to dark red, from the clarity of vines in sunshine to the darkness of the cellars, takes us in colour through all the stages of the birth of a great wine.