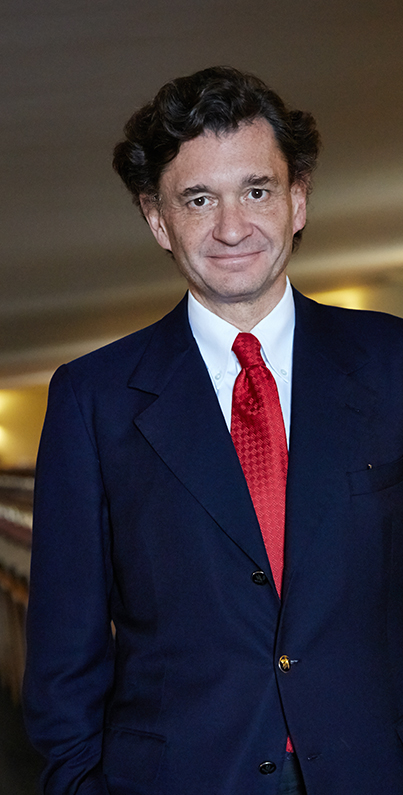 Philippe Sereys de Rothschild, born in 1963, is the son of Baroness Philippine de Rothschild (1933-2014) and the famous actor Jacques Sereys. He is Chairman of the Supervisory Board of Baron Philippe de Rothschild SA, the leading exporter of Bordeaux AOC wines, which produces and markets, among other branded wines, the famous Mouton Cadet. He is the owner with his family of three classified growths at Pauillac in the Médoc: Château Mouton Rothschild, Château d’Armailhac and Château Clerc Milon. He played an active part in the creation of Barons de Rothschild champagnes and chairs the company which oversees the business, in which he represents the family shareholders. In 2015, with his sister Camille and his brother Julien, he founded the Philippine de Rothschild Corporate Foundation to honour the memory of their mother. He has been President of the Foundation since January 2017.A graduate of the French business school ESC Bordeaux and with an MBA from Harvard Business School, he started his career in finance before soon going on to occupy managerial and operational positions in the environment, energy and IT sectors.

He took an MBA from Harvard Business School after graduating from Bordeaux Business School and started his career in finance before taking up managerial and operational responsibilities in major European conglomerates and successful French start-ups in the environment, energy and IT sectors.

On his return to France after spending two years as an analyst in the M&A department of Banque Lazard in New York, he joined the management team at Compagnie Générale des Eaux (CGE, now Vivendi) as a project coordinator.

From 1995 to 1998 he served as CFO of one of the group’s main Italian subsidiaries, specializing in energy management and the environment.

He left CGE/Vivendi in 1998 to become CFO then CEO of SLP Infoware, a French company producing market analysis/CRM software, a position he held until 2003. After selling the company to Gemplus, from 2004 to 2010 he held senior executive positions at Natixis Investissement then NEM Partners, two Natixis Private Equity funds focusing on capital development. During this time he made many substantial investments in companies including Newrest (airline catering) and Saverglass (luxury bottle producer).

Since 2011, he has been a co-founder, shareholder and member of the Supervisory Board of Alma Learning, a group specializing in private education, distance learning and training. Alma Learning has majority interests in the private school Cours Hattemer, Hattemer Academy, Cours Legendre, Cours Saint Anne and Euro Formadis. He created Jolt Capital, an investment fund focusing on new technologies, in 2011 and then, in 2012, the Hattemer Foundation, a philanthropic body of which he is the chairman.

He has three children, Léonore, Mathilde and Nathan.