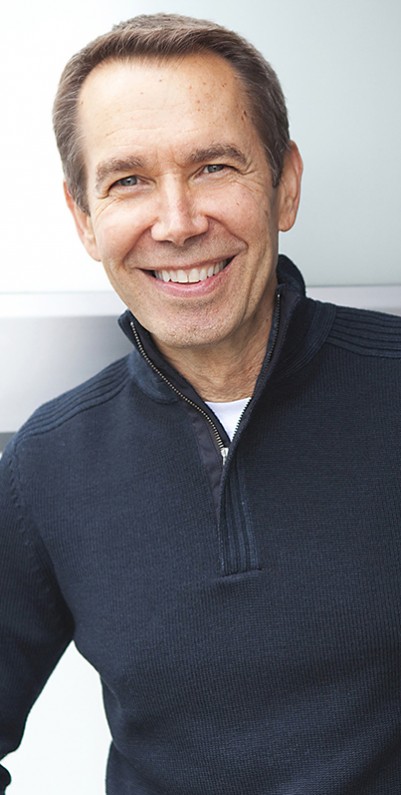 Born in York, Pennsylvania, in 1955, the American sculptor Jeff Koons went to art school in Baltimore then Chicago, where he was introduced to Pop Art and the “ready made”. Moving to New York in 1976, he worked as a commodities broker while beginning to establish himself as an artist with the support, among others, of gallery owners Daniel Weinberg and Ileana Sonnabend.

He came to the attention of the general public in 1986 with his stainless steel Inflatable Rabbit, followed by the anti-consumer satire of his Luxury and Degradation series and Made in Heaven, a libertine graphic series with La Cicciolina, a provocative Italian actress who was his companion from 1991 to 1994.

Proving his status as a leading figure of contemporary art, in 1997 his Puppy, a monumental dog covered in flowers, was installed at the entrance to the Guggenheim Museum in Bilbao; collectors snapped up his Pink Panther (1999) and Split Rocker (2000), a sculpture made with over 100,000 flowers; in 2008, his Balloon Flower (Magenta)

made him for a time the world’s most expensive living artist, while the exhibition of 17 of his works at the Château de Versailles aroused high passions. “The proudest moment of my life”, he declared at the time.

The heir of both Marcel Duchamp and Andy Warhol, Koons felicitously combines the Pop Art tradition with the kitsch aesthetic, whence his fondness for taking familiar objects and icons of popular culture and using a wide variety of techniques to illuminate them with colours, distort, appropriate and recreate them.

He also revisits Antiquity, as with this Birth of Venus, a famous fresco from Pompeii, which his silver drawing turns into a Venus with Vessel – both the cup which holds and the ship which, under a bright sun, bears off into the distance the most exquisite of wines… Surely Mouton Rothschild 2010!