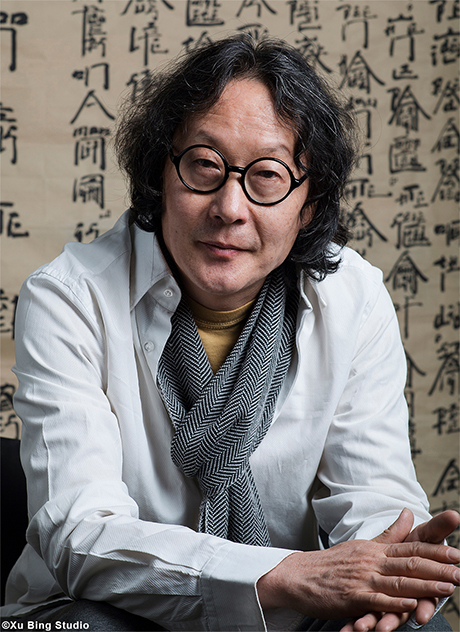 Born in Chongqing in 1955 into an intellectual family (his father was a university professor), Xu Bing attended the Central Academy of Fine Arts in Beijing, of which he would later become Vice-President and where he still teaches. He spends his life between Beijing and New York, where he lived for many years before returning to his homeland.

Hosted by the world’s leading museums, Xu Bing is a multi-talented artist, as testified by his film Dragonfly Eyes and his Book from the Ground: From Point to Point, a novel told exclusively with pictograms.

Having initially demonstrated his mastery of wood engraving, he gained fame with giant installations and monumental sculptures such as Phoenix and his Background Stories; from fantastic beasts to traditional Chinese landscapes, each one is as magnificent as the next despite being made from just organic debris or urban scraps.

This reflection on the illusory splendour of appearances finds full expression in his Book from the Sky, where the artist invents long series of imaginary Chinese characters, treated in the old-fashioned way but having no reference beyond themselves, laid down on scrolls, on vast panels or soaring skywards. However, this abundant linguistic creativity can also express the bonds that unite cultures, as when Xu Bing decides to rewrite the Latin alphabet, drawing inspiration from traditional Chinese ideographic codes and inventing a unique script which he calls Square Word Calligraphy.

That is how his drawing for the 2018 vintage was made: Xu Bing’s characters are designed to disclose themselves to the attentive reader one after the other, in the same way that the aromas and flavours of a very fine wine, with patience, are also gradually revealed.