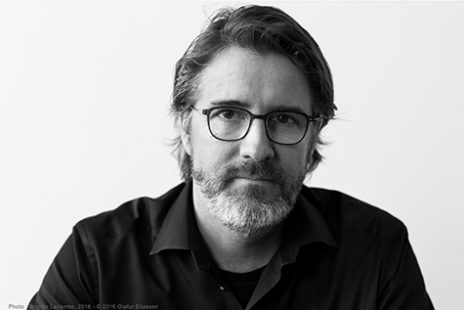 Born in 1967, the Danish-Icelandic artist Olafur Eliasson studied at the Royal Academy of Fine Arts in Copenhagen. He now works in Berlin, where his studio is home to a multi-disciplinary team which includes architects and art historians. Renowned for his ongoing and compelling investigation into embodied experience of our environments, he works in sculpture, painting, photography, film and digital media. A guest of leading museums all over the world, Olafur Eliasson also often engages a wider audience with his architectural projects, his teaching, his promotion of renewable energies and his advocacy of humanitarian causes. He represented Denmark at the Venice Biennale in 2003 and later that year installed The Weather Project, an enormous artificial sun shrouded by mist, in the Turbine Hall of Tate Modern, London. Outdoors, his monumental New York City Waterfalls installation intrigued a huge audience.

Ice Watch for COP21 in Paris in 2014 used melting glacier ice to warn of the dangers of global heating, while his works for the palace and gardens of Versailles in 2016 reflected a world based on appearances and royal favour.

At the intersection of nature, art and science, Solar Iris of Mouton, the imaginary diagram he has created for Château Mouton Rothschild 2019, celebrates the alliance of sun and wine. The wine can be seen in vitro through an oculus in the centre of the label, with the beneficent celestial body revolving around it. The sun’s positions in the Mouton sky, noted at the same time of day over the course of a year, form an analemma that gives the Château’s unique solar identity or, in Olafur Eliasson’s own words, “an abstract portrait of Mouton”. In the shape of an elongated figure 8, it also evokes the symbol of infinity – a promise of eternity for Mouton Rothschild 2019?