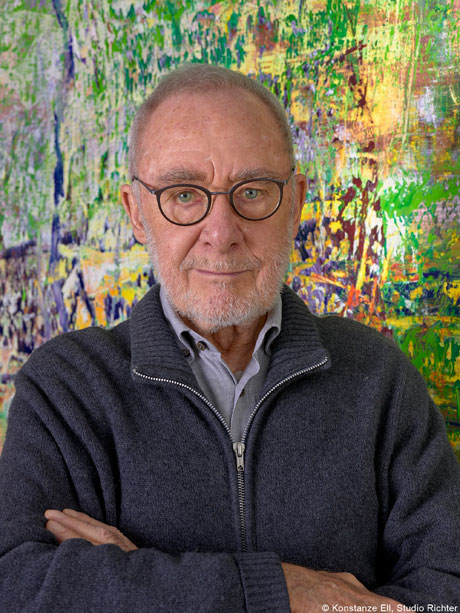 Born in 1932, Gerhard Richter graduated from the Dresden Academy of Fine Arts in 1951 and started his career painting murals in the then German Democratic Republic. Having discovered artistic freedom during a visit to the West, he defected in March 1961. After first moving to Düsseldorf, since 1983 he has been living and working in Cologne. He very soon gained international recognition for his work, at once unusual, complex and easily accessible. Exhibitions of his art have been held in the world’s most renowned galleries, including Tate Modern, the Pompidou Centre, MoMA in New York and the Beyeler Foundation in Basel, and three rooms of Dresden’s Albertinum Museum are devoted to his work. He has also received a number of prestigious awards, such as the Golden Lion at the Venice Biennale and Japan’s Praemium Imperiale.

Richter’s work is mainly structured around a dialectic between painting and photography, figurative art and abstraction. Famous for his “photo paintings” of portraits, still-lifes and landscapes, with their characteristic “blur”, he is also a master of abstract style, a virtuoso who plays with all the possibilities offered by photography.

Constantly seeking renewal, since 2011 Richter has developed a technique of painting under glass, which he calls Flux, that is both random and carefully controlled. He spreads enamel paint on a plate of plexiglass on which he then presses a glass plate, generating astonishing compositions. When the process reaches completion, he finally fixes the plates one on top of the other. Before that, however, he photographs the still fluctuating colours when he considers their composition to be momentarily harmonious: that is how he created the label for Mouton.