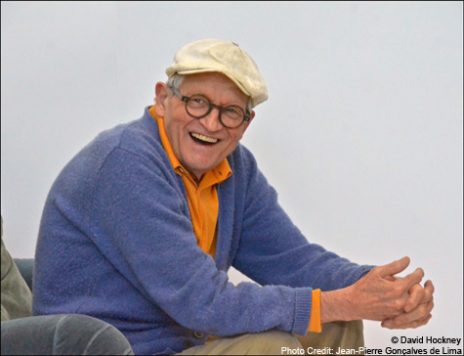 Born in 1937, David Hockney is one of the greatest British artists of our time, having quickly secured his place in the painters’ pantheon. After graduating from the Royal College of Art in London with a gold medal in 1962, he immediately embarked on a successful career. The following year he met Dennis Hopper and Andy Warhol in the United States, where he discovered Pop Art, and went on to teach at the University of California in Berkeley and Los Angeles. He settled in Los Angeles, a haven of sunshine and freedom, in 1966.

He consistently draws inspiration for his painting from his immediate surroundings,
in landscapes, still-lifes and portraits of friends, and has embraced a wide range of techniques over the years, from acrylics and Polaroid photographs to the iPad. He became famous for his paintings of Californian swimming pools in which the human presence, explicit or suggested, is redolent with an atmosphere of ambiguous sensuality.

In his portraits, a genre in which he has always excelled, the faces, painted without concession, combine the classical precision of Ingres with the flamboyant colours of Van Gogh.

His most recent exhibition at the Royal Academy in London, 82 Portraits and 1 Still-Life, recently came to a triumphant close. A retrospective in 2017, to be shown in London, Paris (the Centre Pompidou) and New York, will highlight the strength of image, precision of line and modernity of media deployed by a virtuoso artist who defies conventional labels.

David Hockney was a personal friend of Baroness Philippine de Rothschild, who died in 2014 and to whom his drawing pays tribute. Haloed by vibrant lines of force, signifying both emotion and wonder, two glasses, one empty, the other full, tell the story of feverish expectation and the constantly renewed miracle of the birth of a great wine: Château Mouton Rothschild, of which Baroness Philippine was for so long the guiding spirit.