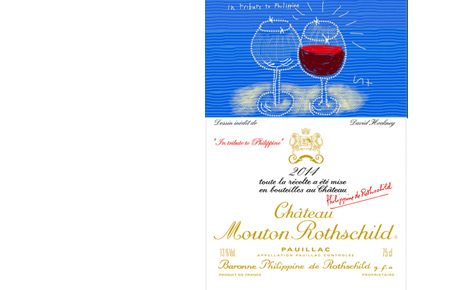 Every year since 1945, a great artist has illustrated the label of Château Mouton Rothschild. Thus, the most famous names in contemporary art are brought together in a collection to which a new work is added each year.

The commission for the illustration of the 2014 vintage was given to the English painter David Hockney, born in 1937. Influenced by Pop Art and a master of the most up-to-date techniques, from acrylics to the iPad, he nevertheless falls within the figurative tradition, especially portraiture, painting people and objects in bright, contrasting colours.

David Hockney was a personal friend of Baroness Philippine de Rothschild, who died in 2014 and to whom his drawing pays tribute. Haloed by vibrant lines of force, signifying both emotion and wonder, two glasses, one empty, the other full, tell the story of feverish expectation and the constantly renewed miracle of the birth of
a great wine: Château Mouton Rothschild, of which Baroness Philippine was for so long the guiding spirit.

To visit the Château Mouton Rothschild website, you must be of legal drinking age in your country.
You acknowledge that you have read and unconditionally accept
this website's terms of use.