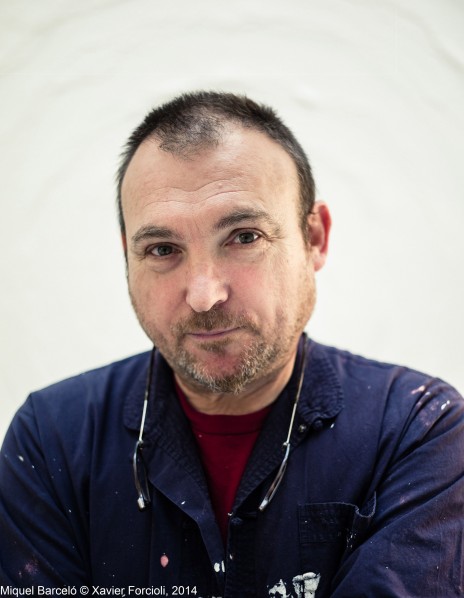 Born in the village of Felanitx on the island of Majorca in 1957, the Catalan painter and sculptor Miquel Barceló studied at the School of Decorative Arts in Palma, the island’s capital. Initially influenced by abstract expressionism, his painting subsequently became more figurative. During the 1980s, the support of leading gallery owners such as Yvon Lambert and Leo Castelli, and museums like Bordeaux’s Centre for Contemporary Visual Arts (CAPC) gave his career international impetus. From 1988, his extensive travels in Africa not only generated thousands of sketches but also renewed his inspiration and his technique by initiating him into sculpture and ceramics. Distinctions have proliferated since 1995. In Paris, where he has his studio, an exhibition of his works was held at the Museum of Modern Art in 1996 and his watercolours were displayed at the Louvre in 2004.

He was presented with the Prince of Asturias Award in 2003. He created a major work for Palma Cathedral, inaugurated by King Juan Carlos. He decorated the dome of the Palace of Nations in Geneva, represented Spain at the Venice Biennale and, in 2010, amazed Avignon and Paris with his Terra Mare exhibition. Each occasion gave this multi-faceted artist an opportunity to impose his universe, at once realistic and dreamlike, a realm of intense colours, combining a wide range of different materials and media, transforming his paintings into flat sculptures with bristling rough surfaces. Fascinated by the depiction of animals and by prehistoric cave paintings, Barceló is a member of the Chauvet Cave scientific committee.

This recent source of inspiration can be seen in his fresco for Mouton 2012, which revisits the Château’s historical emblem. Its two rams, symmetrical and face-to-face, are a reminder that the balance and harmony of a great wine, already present in nature, still set a challenge to be met by the work of human hands.