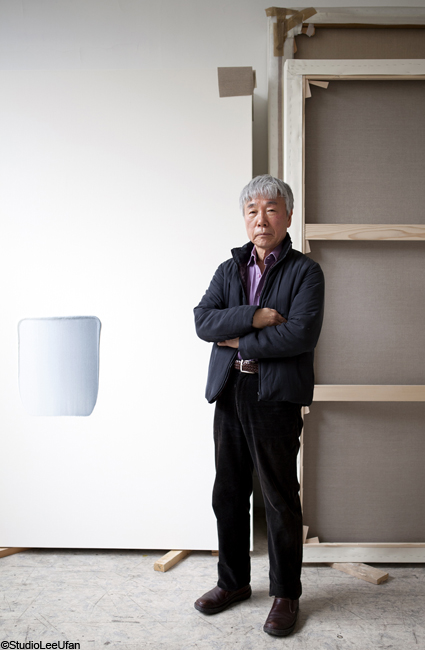 Born in a South Korean mountain village in 1936, Lee Ufan received a traditional education, though open to Western culture. He moved to Japan, his adoptive country, in 1956 and took a degree in philosophy at Tokyo’s Nihon University. Ever since, his art has been nourished by constant reflection on the relationship of the self to the other and to matter, on identity and difference.

His painting and sculpting career truly began in the mono ha, or “School of Things”, movement in the late 1960s, displaying an abstract minimalism and use of natural materials which had affinities with arte povera in Italy and process art in the English-speaking world. He soon discovered and imposed a highly personal aesthetic language: in space, his sculptures combine bare rock with plates of steel or glass, while in his painting, simple forms with a single colour but different shades are laid on the canvas in long strokes or concentrated on a random point,

seeming to originate in a single creative act. He thus achieves a mesmerising effect conducive to meditation, weaving his spell with art of great intensity, harmony and restraint.

The now world-famous artist has won many prestigious awards, including the UNESCO Prize at the Shanghai Biennale in 2000 and Japan’s Praemium Imperiale in 2001, and has exhibited at the Venice Biennale, the Jeu de Paume museum in Paris and the Guggenheim and MoMA in New York. A museum devoted to him, designed by Tadao Ando, was inaugurated at Naoshima, Japan, in 2010, and a dozen of his works were displayed in the park of Versailles Palace in 2014.

In the work he has created for Mouton 2013, the initially indecisive purple of the drawing gradually attains its full richness, just as a great wine is patiently brought to fulfilment in the secret of the vat house.