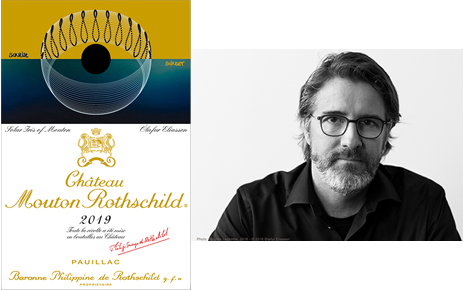 Olafur Eliasson, the Danish-Icelandic artist, has created the original artwork Solar Iris of Mouton for the label of Château Mouton Rothschild 2019.

At the intersection of nature, art and science, Solar Iris of Mouton, created by Olafur Eliasson for Château Mouton Rothschild 2019, celebrates the alliance of sun and wine.

Solar Iris of Mouton is divided into two horizontal strips: the upper part represents daytime with its golden hues, the lower part the night in midnight blue. They frame the oculus which represents Château Mouton Rothschild. Around it, a series of ellipses form a ring that charts the path of the sun in relation to the earth at the Château’s location in Pauillac. The lowest arc designates the shortest day of the year, the top arc the longest.

In the upper part, elongated figure 8 shapes known as analemmas represent the position of the sun recorded from Château Mouton Rothschild at the same time on each day of the year. The variations in the sun’s position in the sky arise from the movements of the earth around the sun and along its axis. The motion of the earth and the passing of time thus become visible in the shape of the analemma. The figure 8 shape also evokes the symbol of infinity – a promise of eternity for Mouton Rothschild 2019?

Olafur Eliasson says: “Solar Iris of Mouton is a map of all the sunsets and sunrises that take place over a year at Château Mouton Rothschild. Depicting each hour of daylight and night-time that go into the growing of the grapes, it is a kind of signature for the vineyard, telling us something about the conditions in which the wine grew and the intimate relationship between the wine and its location. Tasting the wine connects us to the local environment, to the soil, and to the particular weather, seasons, and lighting of the place. Visible through the eye-like oculus at the centre of the label, the wine contains the golden sun, the earth, and the sky; it is local and it simultaneously bears a trace of the celestial.”

Olafur Eliasson sees the wine as a testimony, a fingerprint, of the soil in which the grapes grew and ripened, the year in which it was made, the influence of the sun that year and its cyclical relationship to its environment.

Born in 1967, Olafur Eliasson studied at the Royal Academy of Fine Arts in Copenhagen. He is now based in Berlin, where his studio is home to a multi-disciplinary team which includes architects and art historians. He works in sculpture, painting, photography, film and digital media. A guest of leading museums all over the world, he represented Denmark at the Venice Biennale in 2003. In 2016, Eliasson created a series of interventions for his exhibition at the Palace of Versailles, deploying mirrors and light, fog and water to amplify feelings of impermanence and transformation.

Julien de Beaumarchais de Rothschild, co-owner of Château Mouton Rothschild and responsible for producing the label, explains: “I have been fascinated by Olafur Eliasson’s work for many years. His wonderful exhibition at Versailles in 2016 was a defining moment for me and I said to myself ‘One day, if he is willing, Olafur Eliasson will be one of Château Mouton Rothschild’s artists’. His art focuses on the essential and that is what he has managed to capture for Mouton Rothschild: time, the round of the seasons and the sun at the centre of everything, treated here in the form of a diagram.”