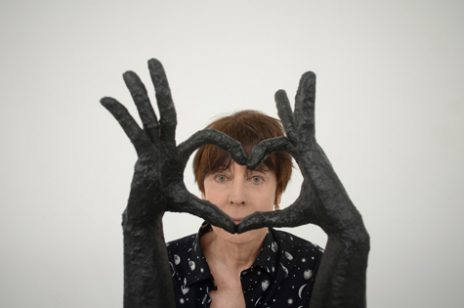 Born in Berck in northern France in 1943, the French visual and graphic artist Annette Messager has held exhibitions in leading museums from Paris to London, Tokyo and New York, and won the most prestigious awards, including the Golden Lion at the Venice Biennale in 2005 and the Praemium Imperiale in Japan in 2016.

Reflecting her insatiable curiosity, her work ranges from drawings and three-dimensional assemblies to monumental installations.

Unafraid of either different forms or sensitive issues, Annette Messager started out by imagining falsely intimate collector’s albums under shifting identities, treating subjects such as childhood, marriage, men, proverbs, love, mushrooms, things that must be done and things that mustn’t, and everyday words, those you say out loud and those you keep to yourself.

Later, those words would take shape and come to life, as in fairy tales where naturalised animal creatures watch puppets swaying,

where body parts come together to form a circle or triangle, and where chimeras dance on walls while textile shapes breathe or manes of hair take wing.

Bearing the imprint of her feminist convictions, her work asks questions of the world as it is, with its rules and its limits, while at the same time surpassing and subverting it, joyfully and iconoclastically. The prisms through which Annette Messager’s work shows life can evoke contrasting emotions, from bilious humour to rose-tinted optimism, black despair to the red mist of anger, for everything – love, play, bestiality, torture – is present in it.

For Mouton, Annette Messager starts from the most literal form of drawing: writing, which is also a call, an incantation, as shown here by the repetition in successive waves of the word “Hallelujah”. To it she joins, in a manner both realistic and symbolic, the celebration of two familiar substances, milk and wine, which the Bible often associates with each other, hymning the virtues of both.